# The Concept of Control

Electra can be described as a MIDI device that:

The picture below shows a Fader Control representing Filter cutoff with the value currently set to 8.

Each Control has several attributes that define its function and appearance. The most obvious attributes are:

Electra One users create Presets by organizing various Controls to layouts that suit their needs. These layouts are called Presets. Presets are created, edited, and managed in Electra One App (opens new window) and uploaded to Electra One controller over the USB device port. The picture below is an example of one Page of a Preset: 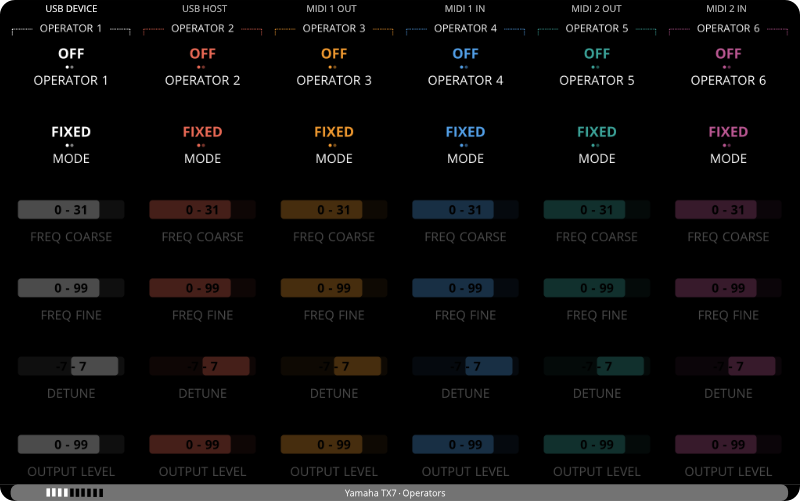 In this example, the Preset consists of a number of Controls used to edit patch parameters of one specific synthesizer. Presets may, however, consist of Controls that are linked to many synthesizers. This allows Electra not to be only a synth programmer but gives you possibility to be in control of the whole rig of gear.

There are four types of controls currently:

Faders are ideal for showing and sending continuous ranges of parameter values. A good example of a fader is a cutoff frequency of a filter or an oscillator detune. Turning the knob smoothly changes the current value of the assigned parameter. As you turn the knob corresponding MIDI messages are sent and the fader value is updated on the display.

The value may change within a given minimum and maximum.

If the value range minimum is negative, the zero value is placed proportionally within the length of the fader. Positive values are then represented by a fader bar extending to the right, while negative values extend to the left.

Optionally, faders may have Overlay assigned. Overlay replaces specified values with a text label. More on info on overlays is provided below.

The lists are one of the key features of Electra. They help to overcome the problem when discrete MIDI values have a specific meaning. Imagine a MIDI parameter VCF Envelope Mode that has the following four values:

The fader would not be very helpful here. When the list is used for this Control, the behavior of the knob changes to act pretty much as an encoder. Turning the knob switches the values of the parameter.

Each list value is represented as a dot. The currently selected one is highlighted and the label is shown. The lists may have up to 255 values. If the number of list items exceeds 16, the visual representation of the list slightly changes to a more fader like style. The text labels are still, however, shown instead of numeric values.

Should the list receive a MIDI value that is not defined in the overlay, the numeric value will be displayed and the list will be highlighted with a red background.

The pads are controls that can be used to switch between two states / values of given parameter or to trigger transmission of MIDI messages.

The envelopes are multi-value Controls that greatly improve the visual representation of ADSR and ADR envelopes. They allow users to map their MIDI parameters to individual segments of envelopes. Electra One can then visualize the shape of the envelope whenever the incoming MIDI data modifies it or when the user changes the values with knobs.

The following types of envelopes are supported:

It is possible to specify which value will be assigned to the knob by default. For example, you may choose Attack being controlled by the knob. It is possible, however, to change this assignment on the fly when working with the preset. It means one knob can be used to change all values of the envelope. 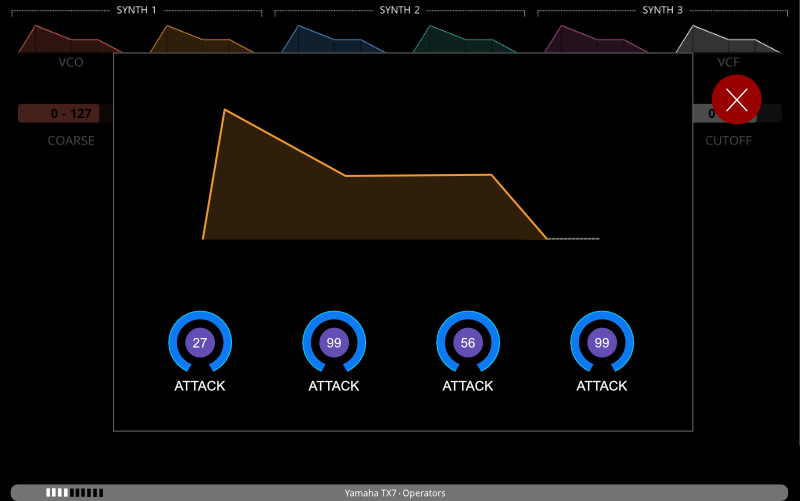